April 01, 2021
4 stars Available now! Another new author for me! The book is set in South Carolina is filled with blended family secrets, murder and suspense! Charlotte and Georgians are half sisters of a wealthy businessman who owns the local baseball team. The quirky detail of his will is that the girls need to work and live together for a year after his death in order to receive their inheritance. But can they do this when the bodies start accumulating all around them? It appears that anyone Charlotte loves could be a target. I particularly enjoyed the character of Mac Taylor. He is the lawyer for the dad and looks out for the girls. This book will take you on a whirlwind of adventure and suspense! Thanks to netgalley and the publisher for the arc. The opinions are my own.
Post a Comment
Read more

April 01, 2021
4 stars Publication date of April 6, 2021 This book is set in Hope harbor, Oregon. Zach is the owner of The Perfect Blend coffee house. He is intrigued when a female customer comes in who is very evasive. As Kat begins to share more of her story with Zach, she begins to trust him as a friend. This was a sweet story of forgiveness and making difficult career choices. My favorite character was Charley who owned the fish taco stand. He was a wise friend in his many conversations. Thanks to netgalley and the publisher for the arc. The opinions are my own.
Post a Comment
Read more

April 01, 2021
3 Stars Publication date of April 6, 2021 This book had me guessing until the very end on who was involved in the murders! I really enjoyed this aspect of the book, that kept me in suspense until the very end. I became a little tangled up near the end about how everything fit together, there was a little bit too much there for me. I enjoyed the characters of Terra and Jack. There was a lot of history between these two and lots of emotions involved. Thanks to netgalley and the publisher for the arc. The opinions are my own.
Post a Comment
Read more

April 01, 2021
This book is being published by Barbour Publishing on May 1, 2021.  It is part of the True Colors crime series 5 stars This story is a fictionalized true crime story set in Denver, Colorado in 1900.  The story is told from the part of the 3 main characters.  The Silver Shadow, Polly and Edwin.  Polly is a twenty-something reporter at the Denver Post trying to find her way in a man's world.   Edwin is a police officer that is trying to avenge his guilt for witnessing his father's murder.  The Silver Shadow is a menacing murderer who is striking women on the streets of Denver.  He feels that he is doing the Lord's work and teaching the people of Denver a lesson.   This was a captivating story to look at all of the different sides of the people that were being affected by the actions of the Silver Shadow.   Thanks to netgalley and Barbour Publishing for the arc.  The opinions are my own.
Post a Comment
Read more

March 23, 2021
5 stars!  Available for purchase now! Another new author for me!  This book had me anxiously turning the pages to find out who the murderer was! The story is set in Raleigh, North Carolina.  Luke is a secret service agent that is being targeted and his coworkers/friends are being murdered.  Faith is an FBI agent who has been assigned the case.  There are so many different puzzle pieces to this suspense and I was surprised at the ending.  I can't wait to read the next book in the series. I particularly enjoyed the character of Luke.  He really cared about the people that were around him.  Faith was a go getter and was a little afraid to get close to people but cared deeply about those that she loved. Thanks to netgalley and the publisher for the arc.  The opinions are my own!
Post a Comment
Read more

A Distant Shore by Karen Kingsbury

March 17, 2021
This book is being published by Atria Books and will be published on April 27, 2021 5 Stars The topic of human trafficking is an extremely difficult topic to read about.  The author does a fantastic job of not going in to gruesome details about the horror of this practice but weaves grace in to the story. Eliza was raised as a Mennonite in Belize but then her father went away when she was around the age of 8.  He requested for her and her mother and brother, Daniel to come to him.  Later, Eliza is told that her mother and brother drowned in the ocean.  At the age of 10, she is swimming in the ocean and is so despondent by the life at the Palace that her father has created, that she gives up when the riptide pulls her down. Jack is a teenager when he is on vacation with his family in Belize.  He and his brother, Shane, are playing football and having a great time when they hear screams from the ocean.  Jack and Shane run to investigate.  This is the pivotal moment in the story as Jack
Post a Comment
Read more

Know Your Bible Journal for Women by Barbour Publishing 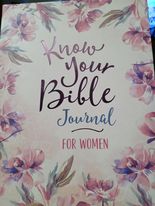 I loved the exquisiteness of this book. I would love to see one for children I look forward to recording my reflections in this book as I read the Bible. I am already thinking about who to buy and give these books to I really enjoyed the 10 words or less and the Details Please sections to explain the chapters of the Bible a little more I can see this book remaining as a treasured possession of mine.  As I read the Bible, I can reflect on what the Lord is speaking to me at the time.  Then later I can look back on it and be encouraged. Thanks to Barbour Publishing for the advanced reader copy of the book.  The opinions are my own.
Post a Comment
Read more
More posts